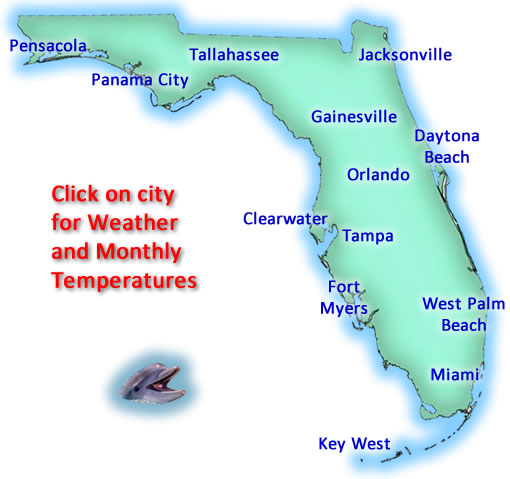 Research and plan your activities or vacation with the weather conditions in mind.  Each of our city weather pages offer both current conditions and charts for normal highs and lows, rainfall and sea water temperatures by month.


Our climate is best described as subtropical with mild winters and quite warm summers. The state is essentially a long peninsula with no place more than 80 miles from either the Atlantic Ocean or the Gulf of Mexico.


The summer months of June, July, August and September are the rainiest months of the year. During this period thunderstorms are common.  Many welcome these rain showers as they provide cooling relief during hot afternoons - but, keep them in mind when scheduling your vacation activities!  One must be wary since these thunderstorms sometimes become quite severe with very strong winds and intense lightning.


Winter brings dryer conditions and of course the occasional cold front.  Northern areas will experience numerous days where the low temperature falls below freezing while this rarely occurs in south Florida. Still, the average low even in the coldest months in the northern region is above 40F in most areas with highs in the 60s. In southern areas the coldest months bring lows that typically average in the 60s with highs reaching well into 70s. Snow is very rare here.


Although snow is very rare, tropical storms and hurricanes are not. Hurricane season is from June 1st through November 30th. These tropical cyclones can bring real devastation. Modern surveillance systems provide plenty of notice of approaching hurricanes, however.