10,000 BC  Nomadic tribes reach the area. The ice age is ending. Land area is nearly twice its current size due to a lower sea level caused by much of the ocean's waters still frozen in polar ice caps.


7500 - 3000 BC  Temperature rises and climate changes until it reaches a state currently experienced today.


5000 BC  People begin settling in the area along coasts and riverbanks.


1000 BC  Beginning of changes from hunter-gather groups to societies based on cultivation.


1000 BC - 1500 AD Numerous Native American groups establish themselves and inhabit the region. Among these include the Apalachee in the northern panhandle, the Timucuan in the central and northeast area, the Tocobaga on the west coast, and the Calusa in southern areas. Over 100,000 Native Indians live in the region by 1500.


1513  The Spanish conquistador Ponce de Leon set foot near what is now St. Augustine. He claims the territory for Spain which he names "La Florida".


1565  Spain sends an armada to build a settlement called St. Augustine and drive out the French. This fort became the first permanent European settlement in the New World that still exists today.


1700s  Creek Indians migrate from Georgia and Alabama south into the area where later they and all local Indians collectively become known as the Seminoles - the "Unconquered / Free People".


1763  Spain cedes Florida to England in exchange for Havana, Cuba as part of a bargain in the settlement of the Seven Years' War. The east and west territories of Florida become the 14th and 15th British colonies in the Americas.


1784  Spain regains control from England as part of a peace treaty that ended the American Revolution.


1821  The United States acquires Florida from Spain as part of a deal to cancel $5 million in debts owed by the Spanish and it becomes becomes a territory of the United States.


1824  Newly founded town of Tallahassee is declared the capital of the territory. Tallahassee was chosen because it was halfway between existing governmental centers of Pensacola and St. Augustine.


March 3, 1845  Florida becomes the 27th state to join the United States of America.


1855-1858  The third Seminole War. Only a few hundred Seminoles survive by hiding in the Everglades.


1861  Florida secedes from the Union to join the Confederacy in the US Civil War. 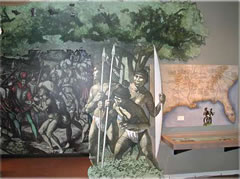 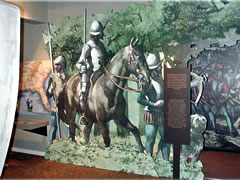